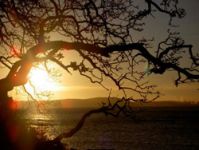 As the second largest community on Vancouver Island, most of the various northern and southern communities would agree that, Nanaimo has become the hub of shopping and gathering! The community is largely consists of young families and retirees, who flock from all over Canada to live in the mild year round climate. Other attractive benefits to the area are the great amenities and the relaxed lifestyle. As a guest expect all the casual comforts, wonderful exploration of sea and island, as well as all the commercial and executive services.

Besonderheiten:
The Malaspina Unversity-College has held welcoming events for such delegates as Queen Elizabeth and is one of two University studies institutions on Vancouver Island.

Another international acknowledgement for the town - the famous dessert, “The Nanamio Bar”, was created and entered into a national magazine baking contest (around 1971) by a house wife living in Nanaimo, who won and chose to name the recipe after her home town.

Geschichte:
The name Nanaimo, is derived from the Snuneymuxw, First Nation Coast Salish people, whose home land ran to the shore of Nanaimo’s largest habour, Departure Bay. Their large long house (100 feet long by 30 feet wide) was made of cedar planks which were hand cut and built to house several families. Much of the First Nation artifacts are preserved and cared for at the Nanaimo Museum. The downtown core is outside of Depature Bay. Old town, this area was fanned out in its unique city plan following the natural shore line. The Bastion (a white turret shaped fort) was the first home to the HBC trading company in the area, as well as a jail, a clubhouse and a museum.

Nanaimo’s “Haslam’s Nanaimo Saw Mill” located on the south side of Millstone River has played a large roll in the employment and development of the town. It originally created the wood plank for supplying the miners and finished/dressed wood for lumber. The Chinese families, which inhabited the three various locations of Chinatown (one of the largest in BC in the late 1800’s) as the city grew, were the backbone of Nanaimo’s labour force.


Nanaimo Things to Do