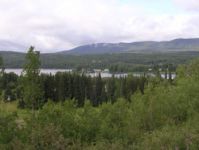 Burns Lake lays at the bottom of the Bulkley Basin next to the largest Provincial Park in British Columbia - Tweedsmuir Park and the smallest - Deadman's Island Provincial Park, an island of only one-hectare actually located in Burns Lake. The massive wilderness at the doorsteps of Burn Lake gives fly-in, fly-out access and tours for sightseeing, hunting, and fishing. Many of the lakes in the surrounding region are stocked with char and rainbow trout. These untouched areas are scenic and give solitude a whole new meaning. An experience that is meaningful and memorable to the true adventurer, that doesn't mean however that those who aren't can't give it a try. Guides are available and first timers will love the Outdoors experience the far north corners of British Columbia - like no where else!

Create your own mixed adventures that suit a variety of skill levels. There are plenty of hiking trails which are also great for horseback riding and the perfect adventure route for cross-country skiing or snowmobiling.

When a day of rewarding on the lake comes to an end, the village of Burns Lake finds many visitors or locals enjoying a toast to a great catch in one of its other famous watering holes.

For more entertainment off the water look to take in one of the Performing Arts and Alternative Arts Festivals held throughout the year.

Was man mitbringen sollte:
Angling regulations - often lakes are closed due to stock concerns, or do not open up until May. Ice may be hazardous in late March. Check with the information centre upon arrival for more details.

Geschichte:
The northern region of Burns Lake, though a village today, was inhabited over centuries by various First Nations which include; the Wet'suwet'en First Nation and the Lake Babine Nation, along with the Cheslatta Band, Burns Lake band, Skin Tyee band and Ne Yy Bunn band. These aboriginal people, today, still make up an equal population, in numbers to those of European descent.

During the discovery and development of British Columbia in its early settlement years by white Europeans in the north of the province, legend says a fire started in the region (of Burns Lake District) left trees and land sooty and black. By the time the Borland Expedition arrived, in 1866, to provide a Overland Telegraph, the area was in dark condition and was given the name Burnt Lake, later shortened to Burns Lake. There are no other speculations around the naming of the lake and town.

As the progress for the Grand Trunk Pacific Railway saw its way through the north, a large tent town was formed around 1911 that then brought many settlers including Scandinavians who would later become a major contributor to the towns cross-country / skiing expeditions. Additional settlers also created supply stores, trading posts, and sawmills - forestry / logging would be its survival industry.


Burns Lake Things to Do